Pam Weber was born and raised in Kitchener, Ontario.

She graduated from University of Guelph in 1979 with a Bachelor of Arts degree with a Fine Art major. At Guelph, Pam studied a wide variety of art mediums, from figurative drawing to sculpture. However, it was printmaking, under the direction of accomplished printmakers Walter Bachinski and Gene Chu that gave her the greatest challenge and satisfaction.

In printmaking, Pam found, what was for her, in art, an ideal balance between the creative artistic vision and the importance of following a measured process.

Not surprisingly, upon graduation Pam started working in the commercial printmaking business. In 1981 she started Oink Ink Productions, a screen-printing company, with her business partner in Kitchener. This venture allowed her to combine her creativity with the challenges of owning and operating a successful business.

In 1984 she married and moved to Ottawa where she continued to study lithography, serigraphy, and graphic art at the Ottawa School of Art and Algonquin College. While employed as a production artist at a screen-printing enterprise, and later a publishing company, she still managed to get involved with the local art community. Pam also had a brief stint as an opaque artist, applying her brush to acetate film, for Hinton Animation Studio, the producer of The Raccoon series.

Gradually, Pam changed her medium from printer’s ink to mixed media and collage; finally to acrylic paint. In acrylic paint Pam found a long-running medium in which to create her signature bold and colourful images.

In the summer of 1995 she moved to Calgary with her husband and three sons; this change in scenery provided an environment to explore a new and, for her, a compelling new subject matter, the Western landscape. 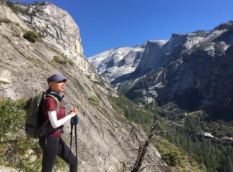